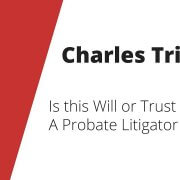 Is This Will or Trust Valid? A Probate Litigator Explains

Parents With Teens Beware: 100 Deadliest Days
Scroll to top
This website uses cookies to ensure you get the best experience on our website. Learn more
Got it!