Division of Property in a Divorce

You are here: Home1 / Research Your Legal Issue2 / Family Law3 / Division of Property in a Divorce 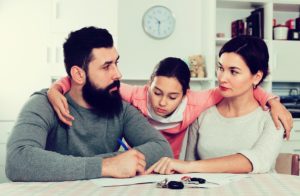 Division of Property in a Divorce

What Is the Difference Between Community and Non-Community Property?

Generally, community property could consist of:

Specific items that are examples of community property include:

How Does Division of Property Work in a Divorce?

In some cases, the court may not physically divide a married couple’s property. Instead, the court could award each party in a divorce with an equal percentage of the monetary value of their community property.

Who Gets the House?

Houses are treated a little differently. For spouses with kids, then the parent who spends more time with the children often will get to stay in the house with the kids. If you and your spouse do not have children, then if one of you purchased the home with separate funds, then that person has a right to ask the other spouse to leave the house.

If you bought your home with community funds, then things can become complicated. In this case, neither spouse can kick the other person out of the house. Therefore, if you were to come home and find that your spouse had changed the locks and locked you out, you may have the option to call the police, because he or she has no right to kick you out. If you bought the house with community funds, then the only way you could prevent your spouse from staying in the house is if he or she is a domestic abuser and a court has granted you a restraining order against him or her.

How Is Debt Divided in a Divorce?

When a marriage ends in divorce, in addition to a couple’s assets being divided up between them, so are their debts. Laws regarding division of debt in a divorce vary from state to state. For the most part, debt is treated similarly to division of property in a divorce. Therefore, if a couple does not decide how to divide their marital debt on their own or with the help of a mediator, then a judge will decide for them. In some cases, if one spouse has more property following a divorce, then that spouse will also be responsible for a higher percentage of debt because of a divorce. However, generally, debts and assets are divided equally between the spouses.

Talk to a Family Law Attorney About Divorce and Separation

If you are even just considering a divorce, you should speak with a family law attorney. You need to know what your options are, what the divorce process will involve, and whether it is right choice for your and your spouse’s situation. In many cases, experienced divorce lawyers will meet with you to discuss your case for free, including examining your situation, answering your questions, and explaining your options.

Thanks for Paying My Student Loans, I Want a Divorce

How to Save Money While Going Through a Divorce

Divorce is a Pain in the Assets