What Should I Do If I’m the Victim of Workplace Retaliation? 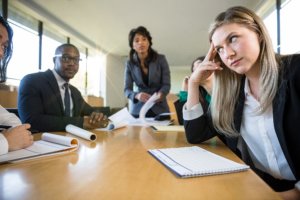 It takes courage to report discriminatory behavior or harassment occurring in the workplace. Unfortunately, in many cases, reporting on-the-job discrimination or harassment can result in the person who reported it becoming the target of workplace retaliation. In such cases, it is crucial that workplace retaliation victims talk to an attorney about the situation as soon as possible. Workplace harassment and discrimination lawyers understand how to both protect victims and bring those responsible to justice.

What is Workplace Retaliation?

Workplace retaliation is an area of employment law defined as an employer punishing an employee for taking part in a legally protected activity. In many cases, the legally protected activity that the employee takes part in involves reporting harassment and discrimination occurring in the workplace. Some employers do not want that type of information to come to light, because it could mean trouble for them. Therefore, those types of employers will punish employees for reporting harassment or discriminatory behavior.

Examples of workplace retaliation include:

Whether it is one of the actions above or something else, if an employer’s actions can be considered adverse enough to convince a reasonable employee to avoid submitting a complaint or to retract a previous complaint, then it could be considered illegal workplace retaliation.

In addition to employers retaliating against workers, employees can also retaliate against employers and supervisors. Examples of employees engaging in workplace retaliation include:

There can be several reasons for workplace retaliation. Several common reasons include personal disagreements, personal relationships, and incidents that occurred outside of work. For example: if a supervisor and an employee were a couple and then broke up, and the supervisor then uses his or her position to demote the employee without cause, it could be considered workplace retaliation because of their personal relationship.

Who Is the Victim of Workplace Retaliation?

Finally, there are employees who are dating a supervisor only to have that relationship end, resulting in the supervisor retaliating against the employee in various ways, including denying promotions, demotion, assigning new tasks, cutting hours, and termination.

What to Do If You’re the Victim of Workplace Retaliation

If you are the victim of workplace retaliation, you should do the following:

Victims in workplace retaliation cases are awarded financial damages. This can include lost wages, loss of benefits, and medical expenses. In such cases, you will have to prove your financial losses due to the retaliation. This generally means providing relevant documentation, such as pay stubs, human resources complaints you filed, employment contracts, and benefits paperwork.

If you are experiencing workplace retaliation, you should begin creating a paper trail with detailed notes about the incidents, complaints filed with HR and the EEOC, pay stubs from both before and after the retaliation began, and other documentation. You should also talk to an employment lawyer about your situation right away. In many cases, experienced workplace harassment and discrimination attorneys will speak with you for free about your case. An employment attorney will be able to analyze your situation, explain whether you have a case, answer your questions, and tell you the next steps you need to take to pursue the best option available to you.