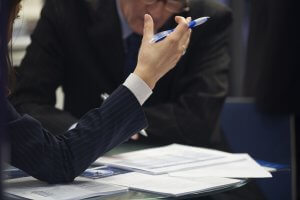 When any individual or party wants to file a lawsuit in the United States, there are two parties involved:

When a lawsuit is filed, there is generally one plaintiff that will file the lawsuit against a single defendant. This, however, can vary. There are many cases, although not as common, in which there can be multiple plaintiffs and one defendant or even sometimes multiple defendants and one plaintiff. In some cases, there can also be both.

In many cases that involve multiple plaintiffs or even multiple defendants, the circumstance that gave rise to the suit probably occurred in one specific scene. An example of this would be a car accident where multiple vehicles were involved. For instance, if a vehicle was rear-ended, followed by a chain of other vehicles, this case could easily involve several plaintiffs. All the victims involved could file a lawsuit against the drivers who rear-ended them. In such a scenario, it is typical that two or more plaintiffs and defendants will be declared on the lawsuit. Since this case would have transpired out of a single location, such cases are frequently referred to as single-event cases.

There are other cases, however, where a form of damage was caused by a single defendant, or a multitude of defendants, to a sizeable amount of people over a widespread area in either related or equal ways. In these cases, it is not efficient for all affected parties to bring forth their each individual claims in a single lawsuit. It is also not practical for several different courts to hear the same claim against the single defendant or the same group of defendants. In these types of situations, unconventional case structures allow for the greatest amount of those affected to have a competent and efficient courtroom to handle their claim. One way to handle claims more efficiently is by dividing cases into either class action lawsuits or into multidistrict litigation.

When a class action lawsuit is filed, only a reduced number of representative claimants will file the petition. The petition will then be utilized to allege that they as well as other unnamed plaintiffs have suffered damages by similar means by the direct or indirect actions of the defendants or defendants. Usually, when a class action lawsuit is filed, the restitution the claimants seek will be the same, or about the same for every one of the petitioners. When and if a settlement is reached, this is approved by the court that oversaw the case. Further, when the settlement is approved, this will be binding to all petitioners who have not already chosen to opt out of the case. If a claimant has chosen to opt out of the case, he or she may have the legal right to pursue the case on his or her own.

Multidistrict litigation, also known as MDL, could occur when there is a case that involves single or a multitude of common questions of fact that are unresolved in various U.S. District Courts. Generally, multidistrict litigation will be established when a single or a group of defendants have similarly affected or harmed numerous amounts of people by various means. In these types of cases, claimants will usually have been hurt through unique methods where a class action lawsuit is not suitable. While this is true, choosing to pursue individual accusations and claims will not be practical or efficient either.

If you or someone you know has been injured by another party, it is vital to seek the advice and support of a qualified attorney to understand what rights you are entitled to. A class action or multidistrict litigation attorney will help you understand if your case needs to be filed as a single event or in the manner of a large group of similar individual cases. Understanding how to file your case is an essential part in recuperating what you lost as well as receiving compensation for the damages you have sustained.