You are here: Home1 / Research Your Legal Issue2 / Business Law3 / Mergers and Acquisitions 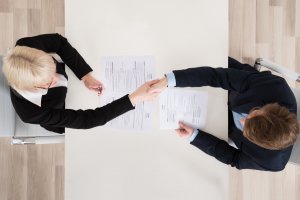 Rights and Responsibilities After a Merger or Acquisition

A merger or business acquisition is very common is today’s market. A merger and acquisition is defined as a business that either takes over or decides to buy out another company or business. This usually transpires between corporations and is usually in an attempt to take that company’s place in the marketplace.

While the terms “merger” and “acquisition” may at times be used interchangeably, they do not have the same meaning. A merger, for example, occurs when two or more businesses or corporations are combined in order to form one new business. This new business is usually referred to as a “survivor”. On the other hand, an acquisition occurs when one business, typically referred to as a “successor”, will purchase another corporation’s assets or stocks.

The distinguishable differences between a merger and an acquisition arise when attempting to configure the company’s rights and/or liabilities in the aftermath of the acquisition or merger. That is, what company will be held responsible for the obligations and/or debts of the business that was acquired.

Typically, in the event of an asset acquisition, the purchasing company will not be held responsible for the selling company’s liabilities or debts. There are, however, exceptions to this:

The highlighted factors should not be assumed. It is always important to consider speaking to a business attorney who has experience in asset acquisitions. In this area of business law, diligence is key to ensuring that the transaction is not only legal, but that it is also fortified and secure.

Providing that a party acquired a company through the purchase of a stock, the buying company will essentially take the place of the selling company. This will allow the company and more importantly its business to continue in its regular routine. One vital element to consider is that when this transaction transpires, that company’s buyer will be assuming all of the debts and liabilities of the seller. Similarly important, this party will be assuming the debts and/or liabilities even if they are not known at the time the purchase.

When a liability is thereby known, there is some form of record about it. For instance, it can be a loan that was provided by a bank and there is record of the loan in the business’ records and books. In opposition, a liability is referred to as unknown when there is some form of owed debt that is not recorded. For example, when a company has lost track of what it owes its contractors and/or employees and the expenses have not been properly noted.

An Overview on Mergers

When a merger takes place, this usually means that a surviving business will assume the merged company’s debts and responsibilities. The surviving corporation will also be held liable for criminal penalizations that were imposed before the date the merger went into effect.

It is important to understand that while a merged business can become terminated, any legal actions that were unresolved against it in the midst of the merger can still continue without a need of an official exchange of the surviving business as the legal and liable party in the lawsuit. Likewise, if a merging business has filed a claim against another business or person before the merging transpires, the lawsuit can continue after the merger. This can happen in under the name either the surviving company or the original business.

The merger or acquisition of a company can be complicated and can often present difficulties. This is particularly true if the company has outstanding debts or has stockholders. If you are seeking to merge a company, consult the professional support of a qualified business law attorney. An attorney who is qualified in the manner can help you understand the legal implications of a merger or acquisition.